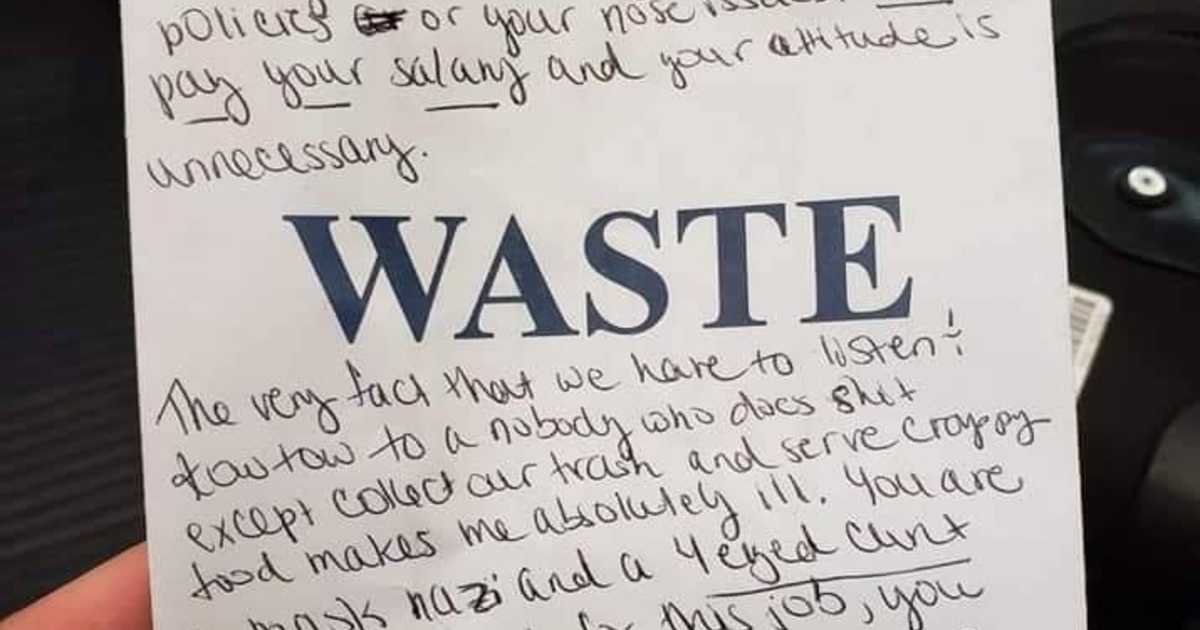 I’m sure you heard about that infamous note by an American Airlines passenger where she called the the flight attendant a “glorified waitresses” and “waste.”

The note was depressing and infuriating at the same time.

When we posted a photo of that note on our page, the comments kept flowing in.

Among the comments were words of support and encouragement to the crew who received the note.

Below is but a handful of these responses.

“We as crew need to have a thick skin as some people have horrible lives and need to vent. They know that we don’t make the policy but just enforce them on behalf of company we work for. It’s our job. I would not waste my breath on him/her. I am a maid/toilet cleaner/food server/nanny but I am damn good at it and make it look easy. So shove it where the sun don’t shine. See…. We can vent too

“I feel terribly sorry for the person who wrote this. The person must be full of waste and anger inside. As for the flight attendant I hope she didn’t take it personally. We know you care and you are just doing your job.”

“It amazes me that someone has this amount of hate inside them, listen we all get a bit pissed off in life but I’m staggered that this could be actually handed to someone.”

“In Germany you can take people to court for offending you. I would have used the Pax identification list and gotten the name. Just to simply teach this person a lesson and watch them fall flat on their face

“Disgusting. I’m actually glad I’ve left because the public are becoming horrid. So sorry this happened to you x”

“This person should be banned from any airline since she has such a low opinion of attendants. All of the attendants I have come into contact with have been very nice, maybe because I am nice to them, don’t complain and cooperate. People who are that rude have a hate problem. She needs some psychological help.”

“Why do we have to deal with this kind of stuff and airlines never do a damn thing about it???. We are people as well, and it is normal to feel UNSAFE when carrying this kind of people on board… What about us??”

“I am beyond outraged and heartbroken by this. I am so sorry to the FA who received this. You know in your heart this is not true. Do not let other people’s poisonous hate eat away at the goodness in you. Virtual hugs to all of you

“Everything that is written there is what the person who wrote it feels inside and what she truly is. Must be such an unhappy human being full of anger and sadness.”

“Surely, this is a person, that really wanted to be a Cabin crew in his/her life and never managed to be, so now she/he is very envious … I feel pity for this pax.”

“Don’t take it too personal. The writer needed to release anger, and didn’t know how, but to ruin other people’s day too.”

“Well this is heart breaking, and to think, you are working on that flight for their safety and security. Some people deserve to be thrown out of the aircraft mid air! Kudos to the crew that keep on doing their job despite these ignorant……”

“Pathetic.. obviously a very bitter woman and her manners are nonexistent. Unfortunately the world is full of people like her. I have been flying for 34 years. Seen and heard so much but not worth even thinking about it. These type of people just go through life being rude and unhappy. Being professional at our job is what counts and there is a world virus going round so it’s pretty ridiculous that she would make a complaint of this kind.”

It is comforting to know that the passenger was identified and banned from flying with American Airlines.

We hope that she gets banned from all airlines until she makes an official apology to the entire cabin crew community around the world.

The reason I made this post is for everyone to see how words can hurt hard-working human being, and that that everybody must be accountable for what they say and face the consequences.